The above words were very exciting to hear when you were in elementary school. No pencils or books for one day. An adventure to behold. Then come to find out after a glorious day, you had to write a paper about that day. Still, a day outside of school was a fun day anyway.

Saturday started in Evanston with a visit to the local railroad museum and then a visit to the city's railroad station right next to the city's park. Though it has been over 20 years since Amtrak stopped here, the station looks like it did all the years it has been there but man, is it pretty!! The exterior have restored and all of the wooden beams sport a fresh coat of green paint. The interior is remarkable. The men’s and women’s restrooms are on either side of the main entrance. The floors in the passenger waiting room have a thick coat of polyethylene and you could play basketball on them. All you need are the hoops. The freight room has stacks of folding chairs as the station can be used for social events. The old freight weighing scale still works. Me and four other railfans stood on the platform, moved the weights on the scale and it listed about 1400 pounds. Maybe a bit heavy considering all of the wonderful food we have enjoyed. 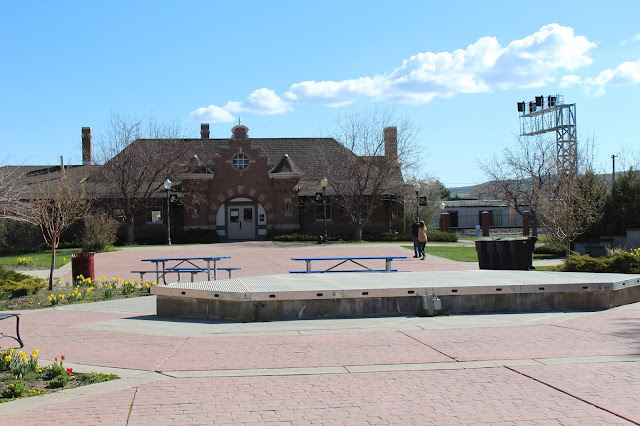 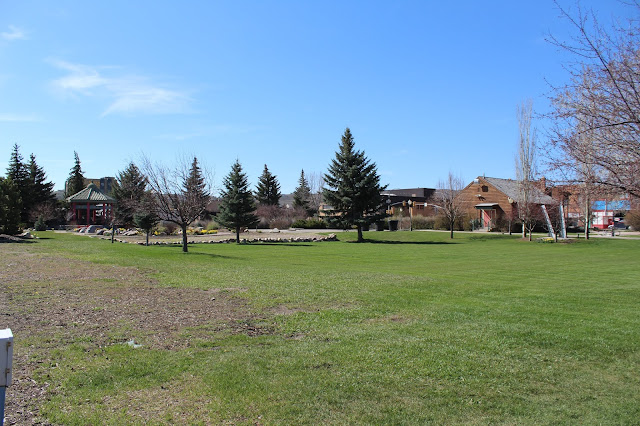 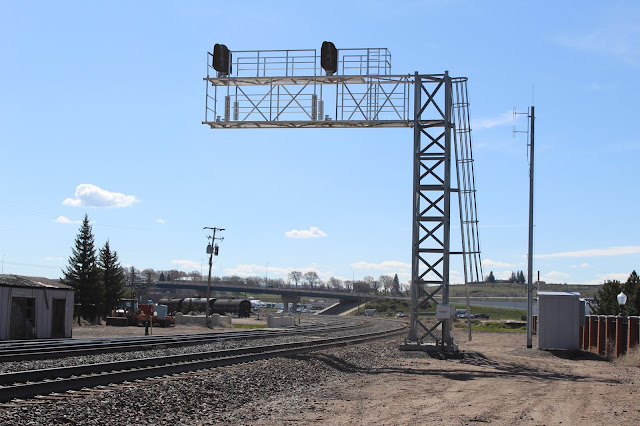 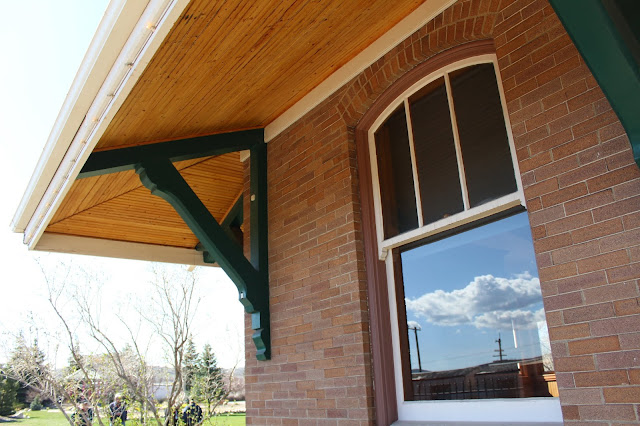 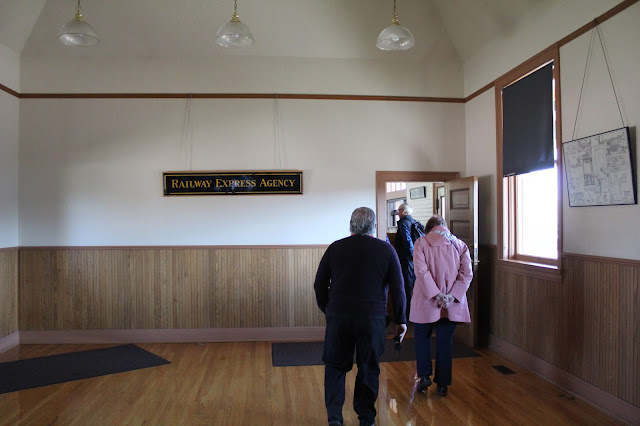 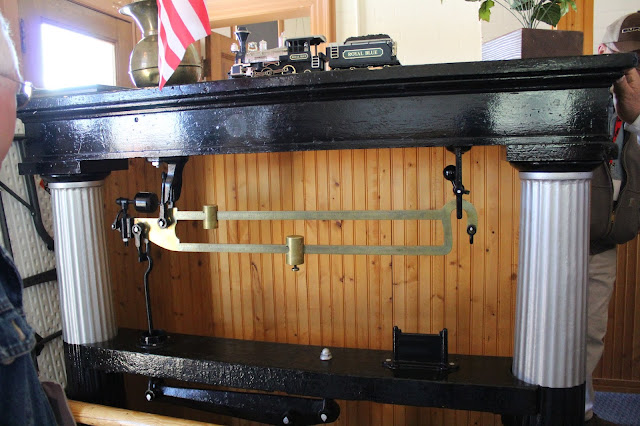 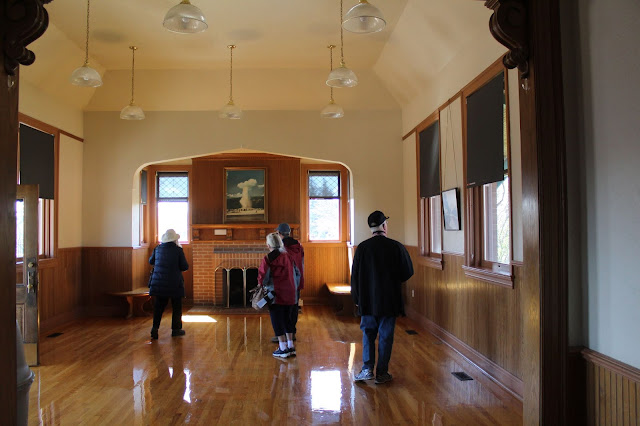 Next was a tour of the Evanston Roundhouse. On the outside, the building looks like Day One.  The brickwork is immaculate and all of the windows have been replaced. Framed windows from floor to ceiling. All of the wooden framing beams are original and have been meticulously cleaned. Considering this roundhouse serviced Union Pacific steam locomotives in this part of the country, you would never know that it use to be that dirty. The floors sparkle. Some of the old tracks that supported the locomotives have had their flange guides covered in wood. The roundhouse hosts social events and the local high school’s annual Senior Prom. Chairs and long tables were set out for us and one of the local restaurants catered our visit. And the highlight was riding the roundhouse’s locomotive turntable. As we slowly spun around, the remaining locomotive stalls were in various stages of renovation. Again, all of the exterior brickwork looks like Day One.  Eventually the roundhouse will house local businesses. And the Union Pacific gave us some entertainment with a westbound and two eastbound freights. 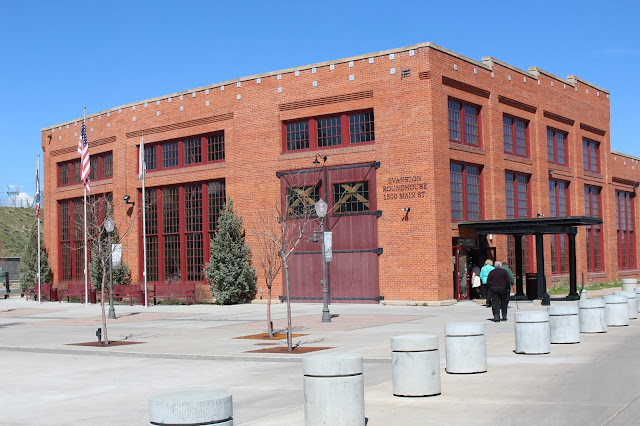 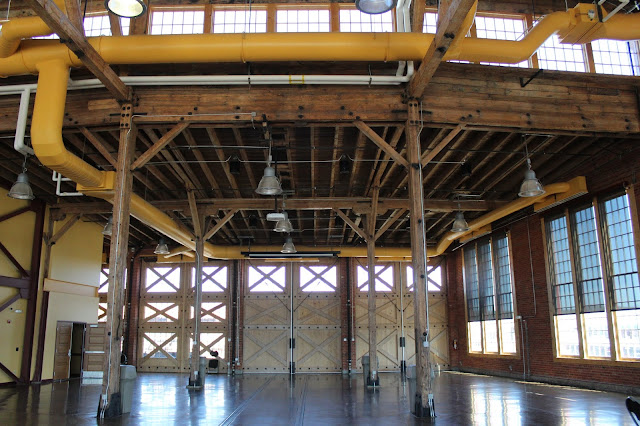 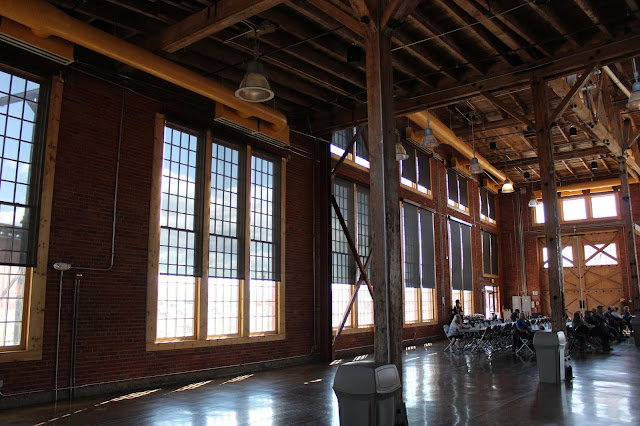 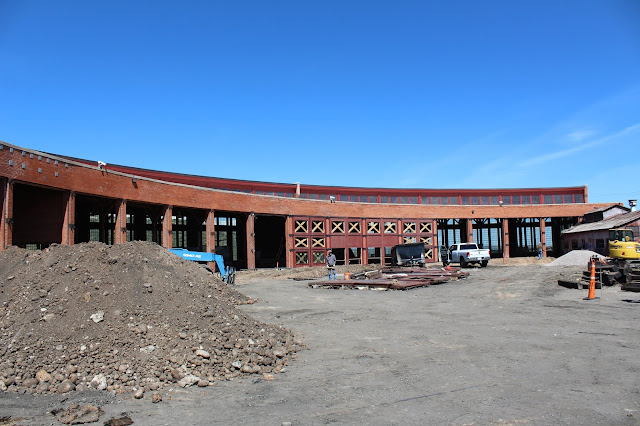 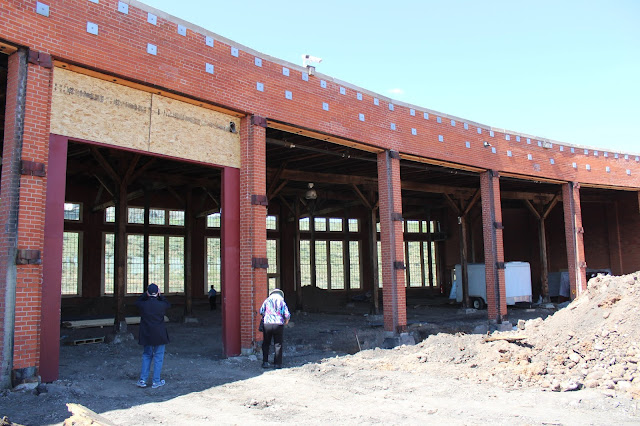 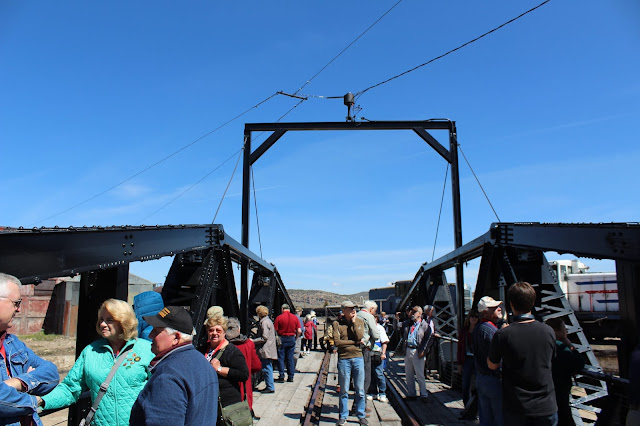 Then came the road trip. We departed downtown Evanston at 12 noon with an estimated arrival in Cheyenne at 6:30pm. That got pushed back an hour due to a couple of side trips. The first was Green River, Wyoming, home of Castle Rock. Our buses parked at the base of a long, black walkway over the Green River freight yard. And as what always happens with railfans, we waited patiently for some trains. To the east we saw a double stack train come into the yard and it stopped at the operations building. It was time for a crew change. Fifteen minutes later, the double stack started to move to our delight and we got a couple of toots on the horn. As the freight picked up speed, we saw an eastbound double stack out in the distance approaching the yard. It was switched into one of the yard tracks. What a treat to see two double-stacks below us. 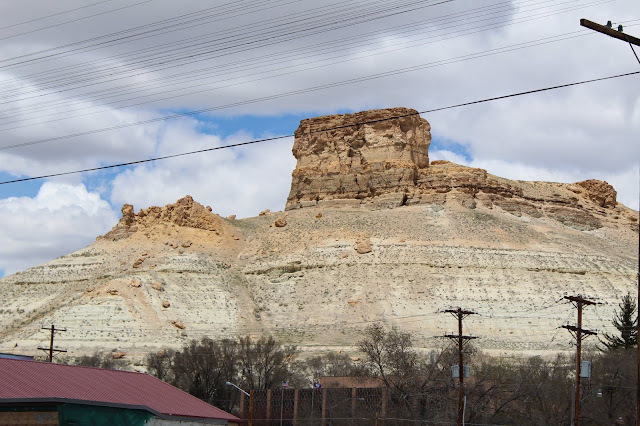 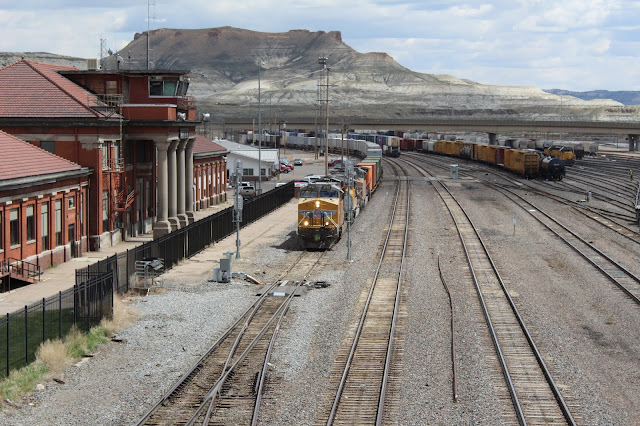 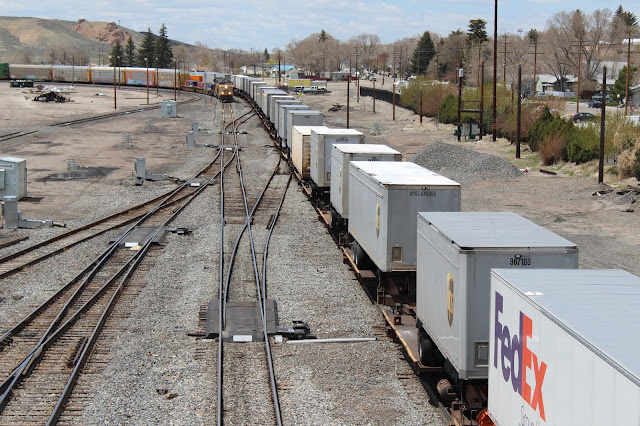 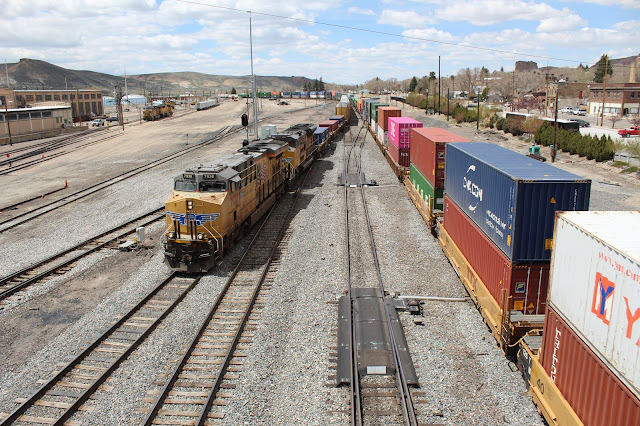 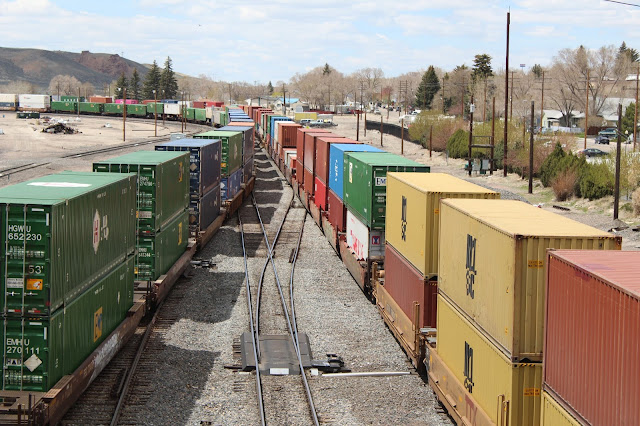 Once again, we were back on the bus and traveling east. All this time I had always wanted to travel across Wyoming. I had traveled as far west as Hanna along US Route 30 but in my previous visits time was not on my side. This trip made it easy to crisscross the state.  Distant mountains surrounded us. In some places it appeared like we were at the bottom of a very large bowl. Small rolling hills and then flat plains. For about half of our trp, the Transcontinental Railroad was within site or paralleled I-80.

Some more traveling and we made a pit stop in Wamsutter. Usually our two buses will each pick a place to stop. This time, both buses stopped at the same rest stop. The people at Love’s Rest Stop were glad to have us.

Into Laramie we went and started the climb east thru the mountains. A 5% grade took a toll on the truckers as they moved over to the right leaving us speedsters the left and center lanes. Thou we were not doing too much better. After reaching the 8600 foot summit, we slowly descended to Cheyenne at 6060 feet.  East of the one building town of Burford, we pulled off I-80 to packed dirt road to the Ames Monument.  From our friends at Wikipedia.Org:

“The Ames Monument is a large pyramid in Albany County, Wyoming, designed by Henry Hobson Richardson and dedicated to brothers Oakes Ames and Oliver Ames, Jr., Union Pacific Railroad financiers. The brothers garnered credit for connecting the nation by rail upon completion of the United States' First Transcontinental Railroad in 1869. Oakes, a U.S. representative to the United States Congress from Massachusetts, asserted near total control of its construction, whereas Oliver became president of the Union Pacific Railroad (1866 - 1871). In 1873 investigators implicated Oakes in fraud associated with financing of the railroad. Congress subsequently censured Oakes, who resigned in 1873. He died soon thereafter.

“The Ames Monument marked the highest point on the transcontinental railroad at 8,247 feet (2,514 m) However, Union Pacific Railroad Company twice relocated the tracks further south, causing the town of Sherman that arose near the monument to become a ghost town.”

More information on the monument can be found at https://en.wikipedia.org/wiki/Ames_Monument 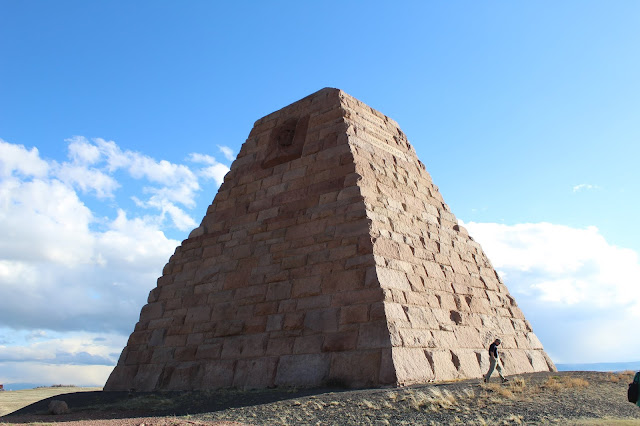 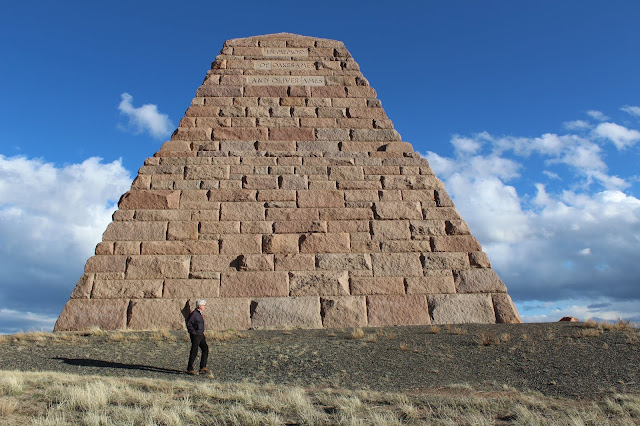 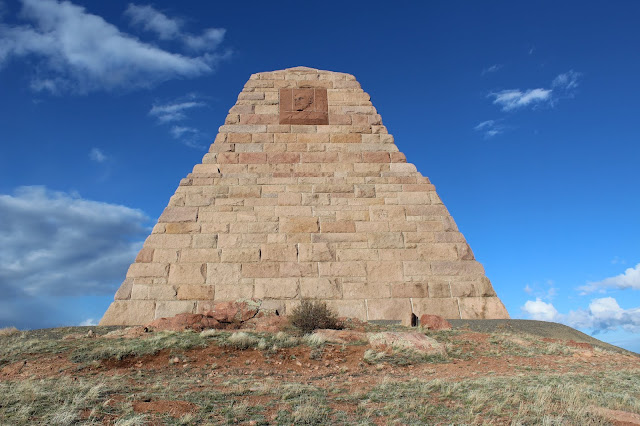 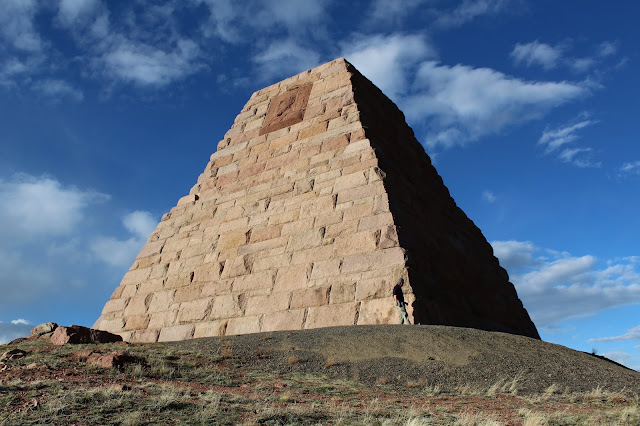 We arrived at the Plains Hotel in downtown Cheyenne at 730pm.  The group was allowed to tour the Cheyenne Depot Museum which was opened especially for us. The depot has information on the history of Cheyenne and the Union Pacific. The large waiting room is sans  passenger benches, and like the Evanston station, can be used for social events. After dinner at the Albany Bar, it was time to turn in.

Sunday we travel to North Platte, Nebraska to visit the Golden Spike Tower next to Bailey Yard, the largest railroad classification yard on the planet.

Please stay tuned. And a Happy Mother’s Day to all the moms out there, including my late mother Mary.

I am Philip J Zocco. On The Road. Along Interstate 80 in Julesburg, Colorado