The above phrase is often credited to the American author and newspaper editor Horace Greeley concerning America's expansion westward back in the 1850's. My old News 8 weatherman Sid Starks told me that back in the summer of 2008 when I was debating things after my daughter had graduated from college and I had just had the roof replaced on my house. Money was a bit tight but somehow I managed to make it work. And I went west back to Nebraska to chase trains for the first time since 2002.

And now, I once again am going west. And doing it with the help of Amtrak train #3, the Southwest Chief. Departure time today is 2:50pm CDT.

But before we leave the Windy City, there is one building outside my window on the 12th floor of the Congress Plaza Hotel that cause my eye. In fact, I was there last summer. The top photo is the Willis Tower which offers an excellent view of greater Chicagoland from their Skydeck. From our friends at Wikipedia.Org:

"The Willis Tower, built as and still commonly referred to as the Sears Tower, is a 110-story, 1,450-foot (442.1 m) skyscraper in Chicago, Illinois. At completion in 1973, it surpassed the World Trade Center in New York to become the tallest building in the world, a title it held for nearly 25 years; it remained the tallest building in the Western Hemisphere until the completion of a new building at the rebuilt World Trade Center site in 2014. Willis Tower is considered a seminal achievement for architect Fazlur Rahman Khan. It is currently the second-tallest building in the United States and the Western hemisphere – and the 16th-tallest in the world. More than one million people visit its observation deck each year, making it one of Chicago's most popular tourist destinations. The structure was renamed in 2009 by the Willis Group as a term of its lease.

"As of April 2018, the building's largest tenant is United Airlines, which moved its corporate headquarters from the United Building at 77 West Wacker Drive in 2012, occupying around 20 floors. Other major tenants include the building's namesake Willis Group and law firms Schiff Hardin and Seyfarth Shaw. Morgan Stanley plans to move to the building in 2019 and become its fourth-largest tenant by 2020."

And at the top of the tower is a large antenna farm, true to this former broadcaster’s heart. The clientele up there is too numerous to list here, so click on the link to learn more about the Willis (Sears) tower at https://en.wikipedia.org/wiki/Willis_Tower 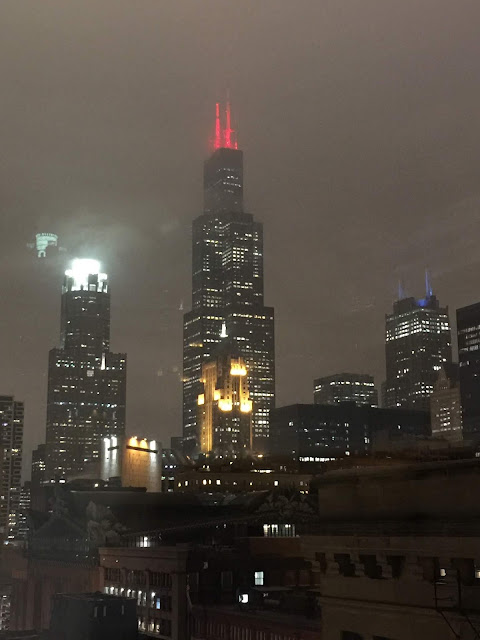 And while we are here, a couple of more snapshots from room 1291: 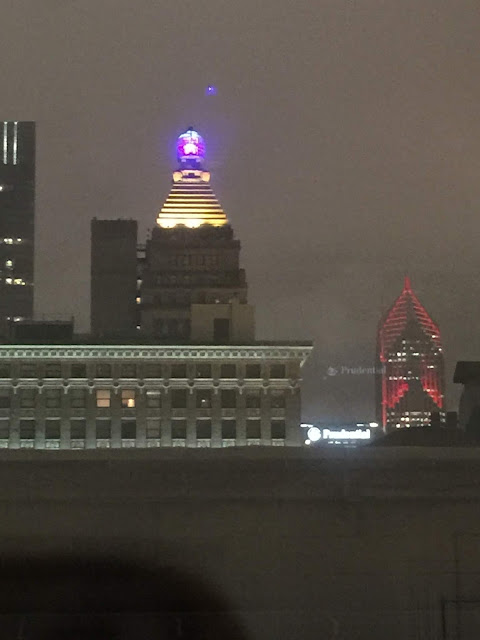 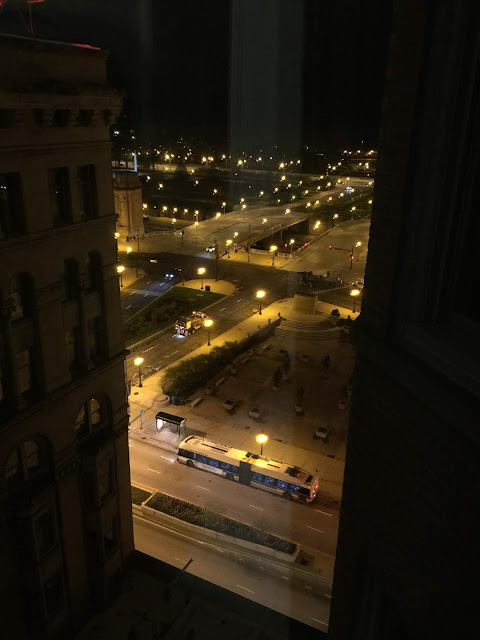 Anyway, departure time on the Southwest Chief will be here soon. Next time I type to you will be onboard the train.. Dare I say "Choo-Choo". Have a great day, everybody. Stay tuned.