My iPhone wakes me up at 6am PDT. It’s 9am EDT back home. Yup, my body clock is still on East coast time. And that’s OK with me.

I open the curtains to my hotel room and the sun is out. Just then I hear a rumbling sound. I see there are train tracks about 50 yards away. And to my delight, a Union Pacific double-stack train with three EMD locomotives goes roaring by. A very nice way to start my day.

At 7am, we are on the coach buses as we continue our journey to our next stop of Ogden, Utah, some 4 ¼ hours away. Along the way, we cross the Nevada/Utah state line: 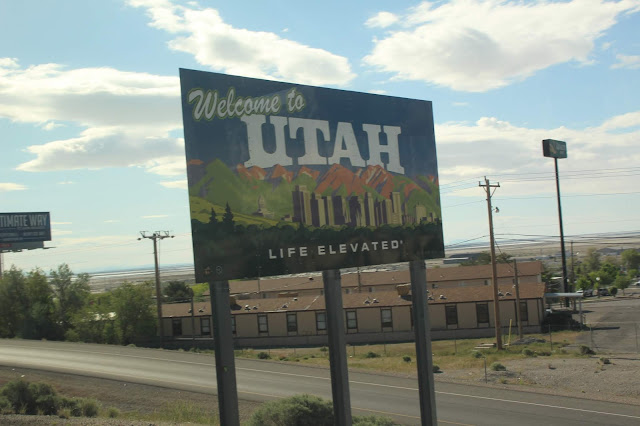 entering the Mountain Time Zone, and the Bonneville Salt Flats. From our friends at Wikipedia.Org:

“The Bonneville Salt Flats is a densely packed salt pan in Tooele County in northwestern Utah. The area is a remnant of the Pleistocene Lake Bonneville and is the largest of many salt flats located west of the Great Salt Lake. The property is public land managed by the Bureau of Land Management and is known for land speed records at the "Bonneville Speedway". Access to the flats is open to the public.

"Geologist Grove Karl Gilbert named the area after Benjamin Bonneville, a U.S. Army officer who explored the Intermountain West in the 1830s.In 1907, Bill Rishel and two local businessmen tested the suitability of the salt for driving on by taking a Pierce-Arrow onto the surface of the flats.

"A railway line across the Bonneville Salt Flats was completed in 1910, marking the first permanent crossing. The first land speed record was set there in 1914 by Teddy Tetzlaff.”

More about the Bonneville Salt Flats can be found at https://en.wikipedia.org/wiki/Bonneville_Salt_Flats

The salt flats are huge. 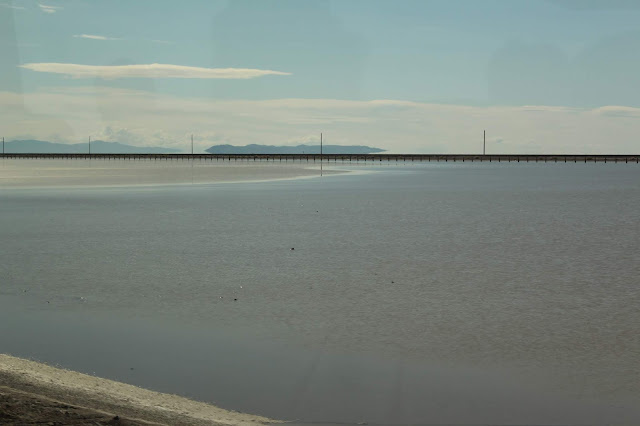 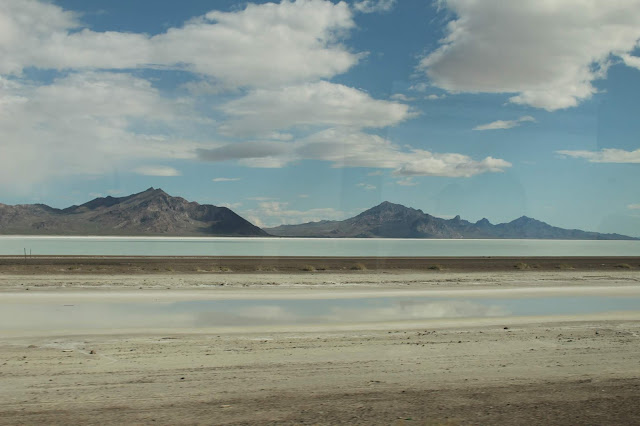 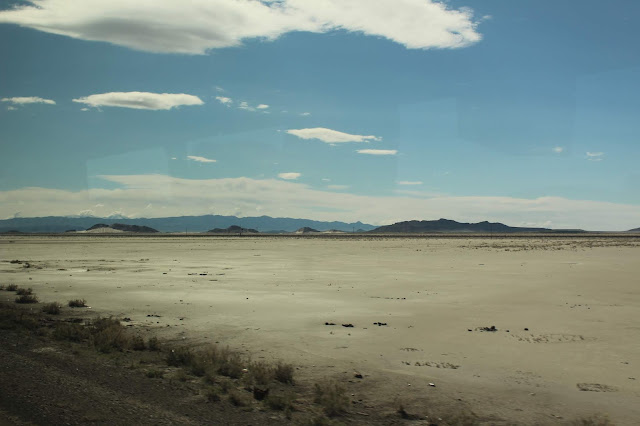 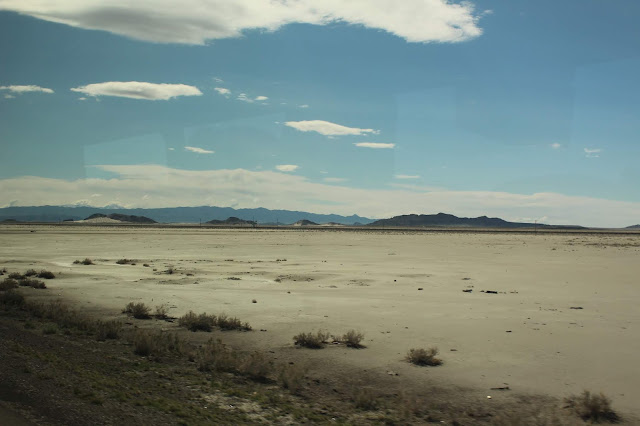 So huge in fact, you cannot see some of the flats due to the curvature of the Earth. And there is lots of water there, most likely because of the winter’s melting snow. But come August when the water is gone, the salt flats are opened to the public and the racing begins at the Bonneville Speedway. Again from our friends at Wikipedia. Org:

“The salt flats were first used for motor sports in 1912, but did not become truly popular until the 1930s when Ab Jenkins and Sir Malcolm Campbell competed to set land speed records.
“A reduction of available racing surface and salt thickness has led to the cancellation of events at Bonneville, such as Speed Week in 2014 and 2015. Available racing surface is much reduced with just 2.5 miles (4.0 km) available instead of the 9-mile (14 km) courses traditionally used for Speed Week.”

More about the Bonneville Speedway at https://en.wikipedia.org/wiki/Bonneville_Speedway

Once clear of the salt flats and before Ogden, we were along the southernmost end of teh Great Salt Lake: 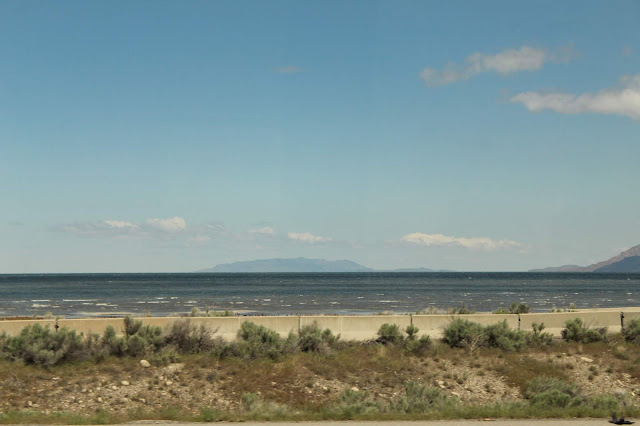 We swung south of Ogden to Heber, Utah, home of the Heber Valley Railroad. Back to our friends at Wikipedia.Org:

“The Heber Valley Railroad (HVRX) is a heritage railroad based in Heber City, Utah. It operates passenger excursion trains along a line between Heber City and Vivian Park, which is located in Provo Canyon. The HVRX carries over 110,000 passengers a year. 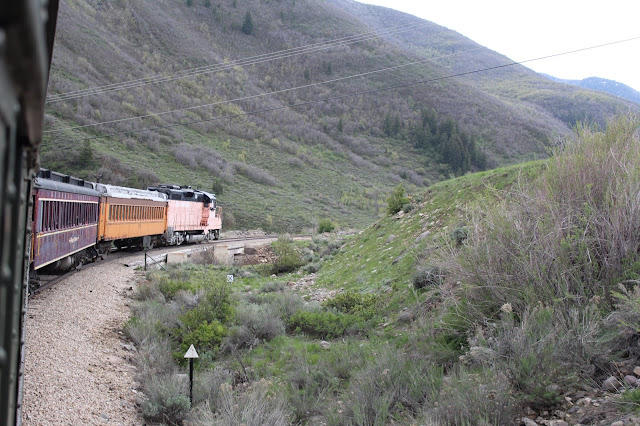 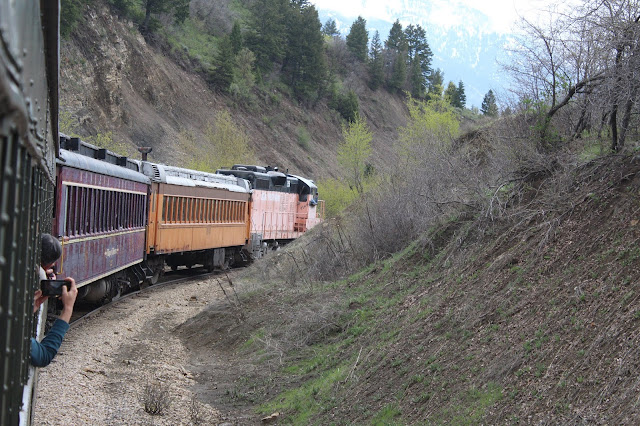 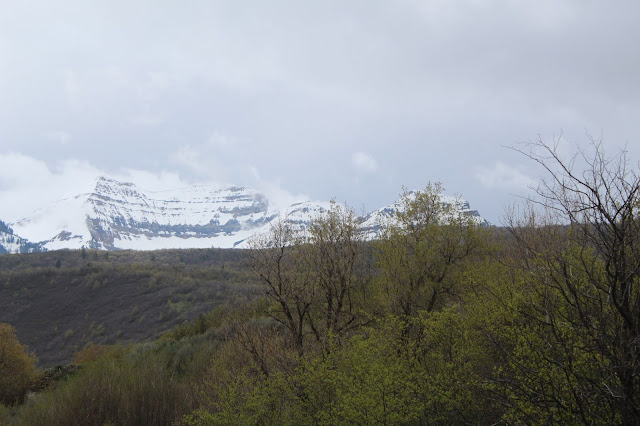 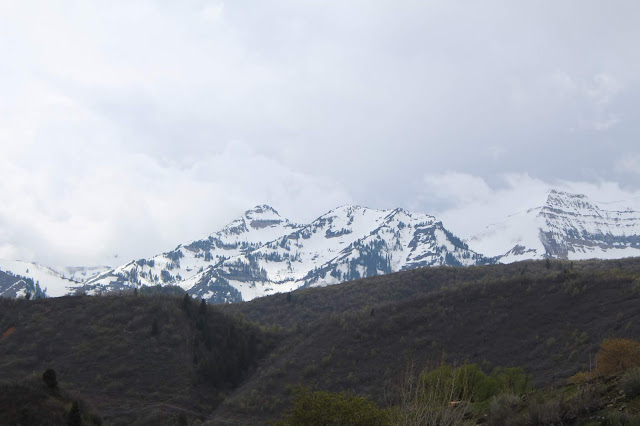 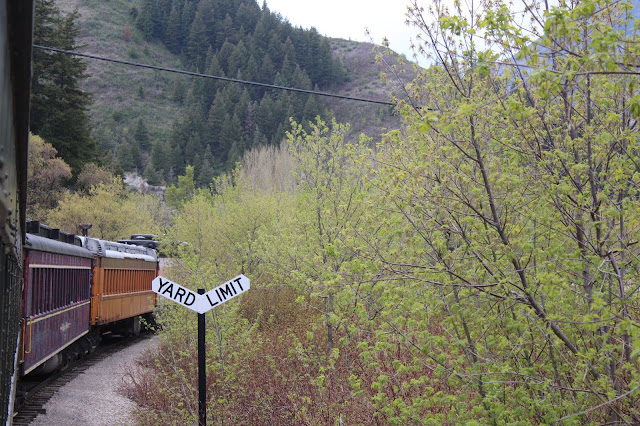 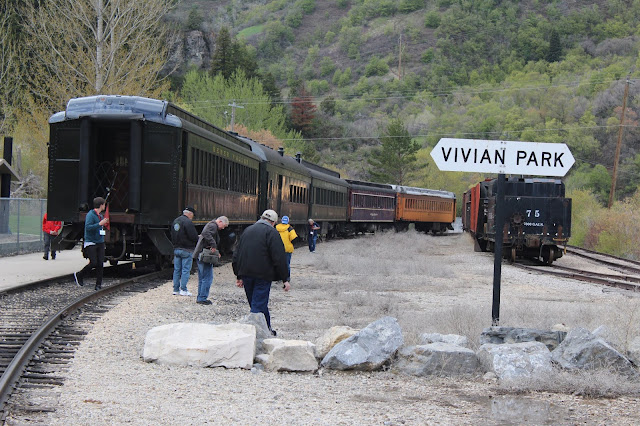 “The railroad line is approximately 16 miles (26 km) long. A typical round trip ride on the train takes about 3 hours. There are a total of four passing sidings outside of the Heber yard limit. Notable landmarks seen from the train include Mount Timpanogos, Cascade Mountain, Deer Creek Dam and Reservoir, Provo River, Sundance Ski Resort, Tate Barn, and Soldier Hollow. A variety of wildlife including deer, eagles, fox, moose, turkeys, hawks, mountain lions (cougars), and beavers, have all been seen from the train as well.

“The line operated by the HVRX was formerly part of a Denver and Rio Grande Western Railroad branch line that connected Heber City to Provo, Utah. The branch line was completed in 1899 and operated freight and passenger service until the line's abandonment in 1967.

“The line was saved for tourist use and was reopened in 1970 when No. 618 and other equipment were brought up the line from Provo. The track between Provo and Vivian Park was later removed and converted into a recreational trail. During the 1970s and 1980s the railroad operated as the "Heber Creeper". In the late 1980s this railroad went out of business.

“Citizens in the Heber area successfully petitioned the State of Utah to help save the railroad, leading to creation of the Heber Valley Historic Railroad Authority in the early 1990s. Since this time the railroad has seen considerable growth. The railroad operates as a non-profit 501(c)(3) organization.

“During the 2002 Winter Olympics the railroad was part of the Olympic Steam Team, carrying spectators to the Soldier Hollow Olympic venue. The railroad's No. 618 and 75 steam-engines were joined by the Nevada Northern Railway Museum's No. 93 steam-engine, in pulling eight-car trains full of passengers, to the Soldier Hollow depot where they disembarked and continued to the venue entrance on a horse-drawn sleigh. The day prior to the Opening Ceremony of the games, all three locomotives were combined into one triple-headed train, and used to transport the Olympic flame from Soldier Hollow to Heber City as part of the torch relay.”

More on the Heber Railroad can be found at https://en.wikipedia.org/wiki/Heber_Valley_Railroad

Oh, and one other thing, we were held up on the train….not quite literally. Seems there are some actors who protruded two cowboy bank robbers complete with guns and rifles and boot spurs. They put on their little routine which was quite funny. Afterwards, I spoke to our tour guide Hannah and I that you guys had planned everything for this trip. She was totally unaware that the “robbery” was to occur. Still, all of us on the tour got quite a kick out of it.

Anyway, we made it to Ogden and The Bigelow Hotel where we were told about the history of the hotel and had a marvelous meal. All in all, a very full day.

Thursday it is over to Ogden Union Station where the world will meet and greet the restored Union Pacific Big Boy #4014 and its smaller brother #844. LOTS of railfans and the public. We’ll talk to you then.

I am Philip J Zocco. On The Road. In Ogden, Utah.